Mitchell Sensenig attended Mansfield University where he studied voice with Dr. Todd Ranney, piano with Dr. Nancy Boston, and conducting with Dr. Peggy Dettwiler, and sang with the world-renowned Concert Choir. He has performed both internationally and on some of the nation’s most famous stages including the Overture Center (Madison, WI) and Carnegie Hall (NYC). He has won his division of the National Association for Teachers of Singing (NATS) vocal solo competition, and has participated in American Choral Director’s Association (ACDA) honor choirs and conducting masterclasses by audition or invitation.

Mr. Sensenig, Director of Music and Organist at the Evangelical Lutheran Church of Our Saviour in Harrisburg, is in demand as a singer, collaborative pianist, conductor, and music/vocal director in Central Pennsylvania. He is the resident Music Director for Theatre Harrisburg’s seasonal cabaret program and annual Arts Awards Gala where, among other acts, he has accompanied for Eliseo Roman who appeared in the original Broadway cast of “In the Heights.”. He also regularly music directs and plays keys for Theatre Harrisburg’s mainstage season in addition to other local community, high school, and college productions.

Mr. Sensenig is active with the nationally-acclaimed Susquehanna Chorale where he is bass section leader and Vice President on the Board of Directors. He is the conductor of the Susquehanna Young Women’s Chorale, pianist for the Susquehanna Youth Chorale, and Assistant Director of the Ephrata High School Marching Unit (a founding member of the Lancaster County Marching Band Coalition). 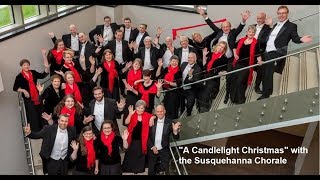 Mark your calendars for A Candlelight Christmas with the Susquehanna Chorale!